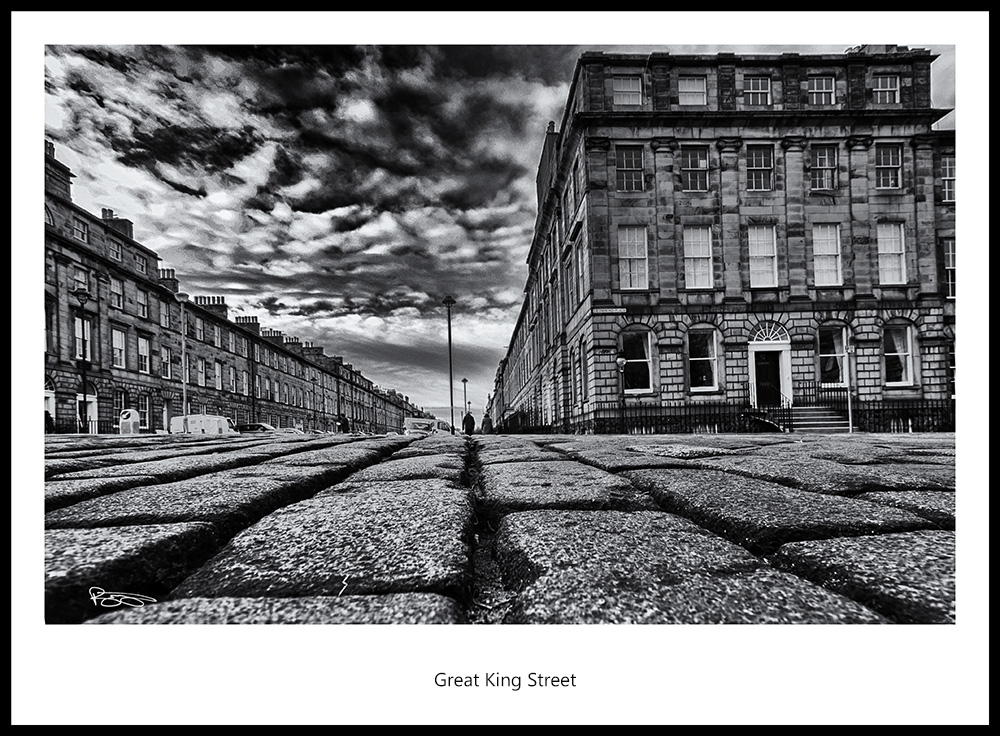 01/03/2016
Going on from what I was talking about with regard to lines and foreground interest, a really powerful way to employ these elements in an image is to change the camera's viewpoint. What I mean by that is to change the height at which it is being held - usually shoulder height. The vast majority of images taken are from the photographer's own eye level. That's fine if that is how you want the image to look; i.e. the scene having exactly the same aspect as you saw when you pressed the shutter. However, if you are looking to use lines or emphasize foreground interest then in many cases that viewpoint won't do enough. The answer is to go up or down. From on high lines can really stand out as plan view dominates over elevation, but foreground interest elements could be lost and of course you need some way of going up - an upper floor or open balcony for example. Going down has a very different effect as can be seen from the image above. "Great King Street", which has featured in the galleries in the past is an image of a street in the "New Town" part of Edinburgh. If the image had been taken at normal eye level then the result would have been quite conventional and not very outstanding. By dropping the camera (not literally!) to ground level a completely new and quite arresting viewpoint is created. The cobbled street is now a major foreground interest element and the gaps are very strong directional lines that take the viewer towards the buildings beyond. Finally, from this viewpoint the sky is a very dominant feature and on that particular day added a strong dramatic element to the background. The result is a fresh and perhaps surprising image, even to those familiar with this part of the city.

A final point associated with taking this image; my eye was not looking through the viewfinder at the moment the shutter was fired. Yes, this method introduces a healthy dose of "trial & error" into the process and at first operating the camera while not looking through it seems very strange. However you will soon develop good control using it this way and it allows for viewpoints not normally possible - very near the surface of water or beyond a vertical edge for example. Of course camera security is paramount here or it all could get very expensive indeed! This method of taking images - "shooting from the hip" is useful in other areas such as street photography and I'll look at that another time. In the meantime don't stand - kneel, get flat out or even hold the camera away from your eye and I'm certain you will be surprised how a familiar scene can be transformed into something fresh and interesting.
Next
Previous