Born and raised in Central Scotland, Roy's first artistic influence was his architect father. By his late teens Roy had cut his teeth on wet film photography and had considerable experience in monochrome imagery, both in-camera and darkroom work. A career in the Royal Air Force meant that photography had to take a secondary role in his life, however in recent years Roy has been able to return with renewed vigour to his lifelong passion.

Primarily attracted to the physical world around us, Roy's images concentrate mostly on landscapes (both rural and urban) but his aviation pedigree ensures that the sky is a frequent and dominant feature of his work. From wide vistas to narrower detail views, his intention is to create images that will arrest, interest and hopefully inspire the viewer to take their own fresh look at the world around us. 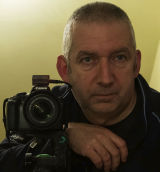